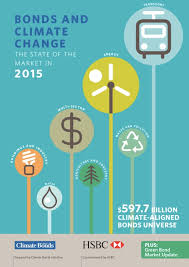 The Climate Bonds Initiative (CBI) recently issued its report, Bonds and Climate Change: The State of the Market in 2015. According to CBI, the total climate-aligned bonds universe stands at $597.7B—a 20% increase over 2014. Almost one-third of this year’s increase is due to the rapid growth of the green bond market.

While the market has grown rapidly as confirmed by CBI, many agree that the industry remains relatively unregulated with no formal definition about what qualifies as green other than voluntary frameworks. Development banks dominate in this space but other commercial banks have issued green bonds, including DNB ASA, National Australia Bank Ltd., and Credit Agricole Corporate and Investment Bank SA.

CBI sponsors the Climate Bonds Blog, which provides regular insight, news, and developments about not only the green bond market but reports on related discussions ongoing at COP21.