Frisbees, Flatulence and the Impact of Scalia’s Vacancy on Important Environmental Cases 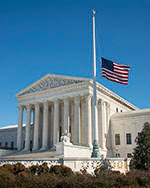 Supreme Court Justice Antonin Scalia undoubtedly had a significant impact on environmental law during his 30 years on the High Court. Known for his strong opinions and quotable prose, he often showcased both in opinions on environmental issues. One of my personal favorite quotes from Justice Scalia came in his strident dissent in the landmark GHG ruling of Massachusetts v. EPA. In his critique of the majority opinion, he argued that the majority’s reasoning would lead to the conclusion “that everything airborne, from Frisbees to flatulence, qualifies as an ‘air pollutant.’” Massachusetts v. EPA, 549 U.S. 497, 558 (2007).

In a ruling without the flowery language, but with very significant impact on the regulation of GHGs, just four days before his death Justice Scalia joined with four other Justices to grant a stay of EPA’s Clean Power Plan while it is being challenged in the D.C. Circuit Court. The fate of the Clean Power Plan, and numerous other environmental laws and cases, is up in the air now that Justice Scalia’s death leaves only eight Justices on the Court, and little hope of the Senate approving a replacement in the next year. The eight Justices are generally evenly divided ideologically; with Chief Justice Roberts and Justices Kennedy, Thomas and Alito on the conservative side and Justices Ginsburg, Breyer, Sotomayor and Kagan on the liberal side. In the unlikely event that an Obama appointee is confirmed by the Senate, that person would, in all likelihood, shift the balance of the court to the left. If the Senate delays or otherwise denies confirmation of the appointee, as Republican leaders have vowed to do, the vacancy will be left to the next president to fill. Under that scenario, the next Supreme Court Justice could shift the balance of the court to the liberal side, or back to the conservative side, depending on the outcome of the November elections.

Of course, Supreme Court Justices do not follow strict party lines, as evidenced when Chief Justice Roberts wrote the majority opinion upholding the Affordable Care Act despite strong pressure from conservatives (and other conservative Justices) to overturn the landmark healthcare law. In addition, if a Republican wins the presidential election, that administration may seek to change some of EPA’s recent high profile regulatory actions. The EPA rules currently being challenged in the courts may be undercut or altered by a future administration, making the judicial review less significant. Nevertheless, the next Supreme Court Justice will certainly have an impact on the world of environmental law in the short and long term, and his or her ideology and history of rulings on environmental cases will be hotly debated in the candidate’s confirmation hearings.