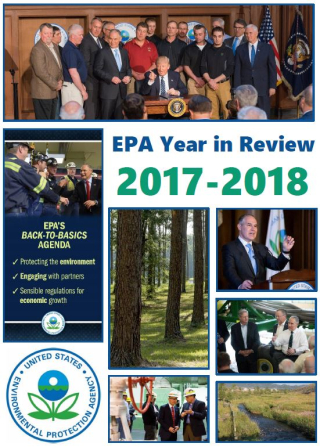 On Monday, March 5, 2018, EPA issued a report titled EPA Year in Review 2017-2018. The report contains an introductory letter from Administrator Pruitt, who states that he has been “hard at work enacting President Donald Trump’s agenda during [his] first year as EPA Administrator.” The report highlights accomplishments at EPA over the past year, with a focus on the roll back of regulations from the Obama Administration, such as the Clean Power Plan and the Waters of the United States Rule. Administrator Pruitt stated that “[i]n year one, EPA finalized 22 deregulatory actions, saving Americans more than $1 billion in regulatory costs.”

According to the report, Administrator Scott Pruitt set forth a “back-to-basics agenda” with three objectives:

The report also identifies EPA’s “core mission” as “clean air, land, and water,” and argues that in recent years, “central responsibilities of the Agency took a backseat to ideological crusades, allowing some environmental threats – like cleaning up toxic land – to go unaddressed.” In light of these alleged lapses, EPA states that:

Administrator Pruitt returned the Agency to its core mission and prioritized issues at the heart of EPA’s purpose: ensuring access to clean air and water, cleaning up contaminated lands and returning them to communities for reuse, improving water infrastructure, and ensuring chemicals entering the marketplace are reviewed for safety. In just one year, EPA made immense progress on these fronts, and the American people have seen real, tangible results.

Topics covered in the report include:

The report concludes with several pages of quotes from elected officials, state environmental agencies, and industry representatives, offering praise for the work done by EPA and Administrator Pruitt:

The Year in Review report was tweeted out by Administrator Pruitt and can be found on EPA’s website.