Townships Look to Take the Air Out of Wind Farm 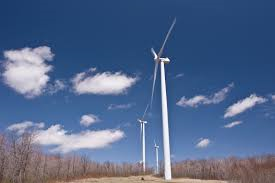 NextEra Energy Resources LLC (“NextEra”), the largest generator of wind energy in North America, is currently locked in legal disputes with local townships over its new wind energy project, the “Tuscola Wind III Energy Center.”  NextEra’s subsidiary, Tuscola Wind III LLC (“Tuscola”), plans to construct the 55 turbine wind farm across the Fairgrove, Almer, and Ellington Townships of Tuscola Country, Michigan.  The project, if completed, will be the third wind farm constructed by NextEra in Tuscola County.  The proposed $200 million dollar wind farm is projected to supply wind energy for up to 50,000 homes.

After reaching agreements with nearly 100 landowners to secure land for the project, Tuscola submitted a Special Land Use Permit (“SLUP”) to the local townships for construction and operation of the wind farm.  However, two of the townships, Almer and Ellington, denied the permits and enacted one year moratoriums on the construction of wind farms.  According to Tuscola, its permits were blocked by newly elected members of the Townships’ Boards who were affiliated with a regional anti-wind citizens advocacy group.  The company alleged that the organization was engaged in a systematic effort to block the Tuscola project and that the group had used “tactics of intimidation, threats of lawsuits, referenda, and recalls . . . in an effort to prevent the development of wind projects.”

The company is now fighting back.  In lawsuits filed in the Eastern District of Michigan, NextEra is seeking to have the Board of Trustees’ denial of the SLUP overturned.  On November 3, 2017, the district court issued its first decision on the matter, affirming the denial of the SLUP by the Almer Township.  The court found that the Township’s Board had properly denied the application after it determined that the purposed wind farm would violate Almer’s noise zoning ordinance. The court noted that although Almer’s noise ordinance was admittedly ambiguous, the Board should be provided deference to interpret the meaning of its own ordinance.  Finding that the board’s interpretation of the ordinance was reasonable, the court elected not to overturn the decision.

On March 13, 2018, the district court reached a markedly different result in Tuscola’s parallel suit against the Ellington Township.  Here, the District Court overturned the Ellington Township’s denial of the SLUP.  Unlike the Almer Township Board, it appears Ellington’s Board refused to even consider the merits of Tuscola’s SLUP, and relied entirely on its newly enacted moratorium to block consideration of the application.  The Court concluded that the township’s moratorium was an inappropriate suspension of its zoning ordinance, and was thus void.  Therefore, the Board could no longer rely on the moratorium as a reason to refuse to consider the SLUP application.  Left open by the decision was whether Ellington could successfully deny the SLUP on other grounds or what timeframe the township had to approve/deny the permit.  Interestingly, the Ellington decision arrived exactly one day after the district court reaffirmed its earlier holding in the Almer case (Both decisions were authored by the same Judge).

Finally, in the newest twist, landowners of property proposed for the Tuscola Wind III site have now filed suit in Tuscola County Circuit Court seeking a court order to ouster the newly elected board members alleged to be part of the anti-wind organization. The ultimate resolution of Tuscola’s dispute may end up relying in part on the success of this new suit.