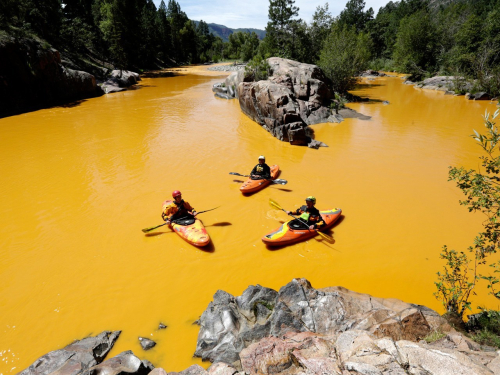 U.S. EPA continues to be on the hook for damages associated with the Gold King Mine located in San Juan County, Colorado. Several years ago, a contractor working on behalf of U.S. EPA to address environmental impacts associated with a closed gold mine, destroyed a plug holding water trapped inside of the mine, causing the release of approximately three million gallons of mine waste water into Cement Creek, which was a tributary of the Animas River. Although U.S. EPA took responsibility for the incident, it has refused to pay damages incurred as a result of he release, leading to lawsuits being filed by a variety of plaintiffs, including the states of Utah and New Mexico, the Navajo Nation, and affected individuals. Plaintiffs asserted a variety of claims, including claims under CERCLA, RCRA, CWA, and the Federal Tort Claims Act (FCTA).  U.S. EPA filed a motion to dismiss, arguing among other things, that it was entitled to sovereign immunity for damages resulting from an ongoing cleanup effort.

On February 28, 2019, the federal district court in New Mexico rejected U.S. EPA’s claim that it was protected from CERCLA liability on sovereign immunity grounds, noting that at least three circuit courts have found that U.S. EPA can face liability under CERCLA where U. S. EPA’s actions in remediating a site are alleged to have caused releases of hazardous wastes. The court also found that plaintiffs’ allegations (which included Utah and New Mexico, as well as the Navajo Nation and individuals), if proven, would demonstrate U.S. EPA’s liability as an “arranger,” “operator,” and “transporter” of hazardous substances. Specifically, Plaintiffs stated claims for arranger liability because they "allege that EPA took intentional steps to dispose of a hazardous substance.” With respect to operator liability, the court noted that Plaintiffs “allege that EPA managed, directed, or conducted operations specifically related to the pollution, that is, operations having to do with the leakage or disposal of hazardous waste.” Finally, regarding transporter liability, Plaintiffs “allege that EPA took steps to drain the mine and treat the water at the site.”

With respect to the RCRA, CWA, and FCTA claims, the court concluded that there were disputed issues of fact that precluded the court from being able to grant dismissal of those claims. We will continue to provide updates on this proceeding.