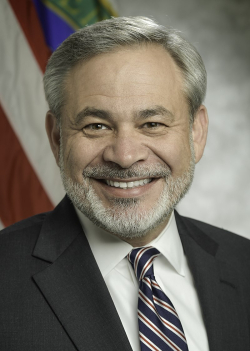 The Senate in a 70-15 vote confirmed Dan Brouillette this week as the new Secretary of Energy to succeed Secretary Rick Perry. All 47 Republicans who were present for the vote backed confirmation, as did 22 Democrats, including Joe Manchin III of West Virginia, Tom Udall of New Mexico, and Richard J. Durbin of Illinois, and one Independent, Angus King of Maine.

At his confirmation hearing, Mr. Brouillette stressed the role of the DOE in advancing research, including focusing his tenure on pushing direct air capture, carbon capture and sequestration (CCS), nuclear reactors, and the DOE commercialization work that fosters novel technologies in the private sector. He stated he would “absolutely” devote more DOE resources to researching DAC, and praised ongoing work on CCS and demonstrations of the technology in Wyoming in particular, nothing that he is “very excited about the work I see being done in Wyoming and within DOE writ large.”

Wyoming has become a focal point of the tension as to the future of coal under climate change policies or other environmental laws and the potential opportunity for CCS to resolve this tension. (Wyoming supplies 40% of the United States’ coal to 29 states.) The Wyoming Public Service Commission Chair has recently spoke about the need for a hard look at the benefits of CCS before shuttering coal plants. Also this week, the University of Wyoming announced a partnership with DOE to accelerate research on carbon capture technology at two of the state’s coal-fired power plants. In light of Mr. Brouillette’s extensive comments in support of Wyoming and CCS, we can anticipate much more on this front.

As noted by the New York Times, before becoming deputy energy secretary, Mr. Brouillette was chief of staff to the House Energy and Commerce Committee and was assistant secretary of energy for congressional and intergovernmental affairs in the George W. Bush administration. He also worked as an executive at the United Services Automobile Association, a financial services provider to members of the military, and Ford Motor Company. He once was a member of Louisiana’s State Mineral and Energy Board.