NY AG Strikes Out in Climate Fraud Suit Against Exxon 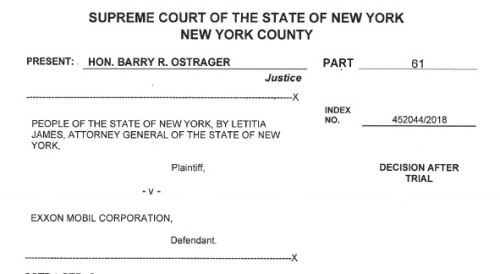 Following a three-week bench trial, the New York Supreme Court ruled in favor of Exxon Mobil Corp. in the climate fraud case brought by New York’s attorney general, who accused the energy company of deceiving its investors about climate change-related risks to its business. In reaching this holding, Justice Barry Ostrager found that the attorney general “failed to prove, by a preponderance of the evidence, that ExxonMobil made any material misstatements or omissions about its practices and procedures that misled any reasonable investor,” which was the threshold for sustaining claims under the Martin Act.

Exxon Mobil’s victory was foreshadowed when the attorney general dropped two of its four claims, one for common law fraud and one for equitable fraud, on the last day of trial. These claims were important to the state’s case because they alleged that Exxon Mobil’s misstatements were part of a scheme to mislead its investors and that Exxon Mobil’s investors had in fact relied on the misstatements when purchasing the company’s stock. Only two Martin Act investor fraud claims remained, which did not require the government to prove fraudulent intent.

An Exxon spokesperson said the ruling affirmed the position Exxon has held throughout the investigation and trial. "The court agreed that the attorney general failed to make a case, even with the extremely low threshold of the Martin Act in its favor," the spokesperson said.

Despite ruling against the attorney general, Judge Ostrager clarified that “nothing in [the] opinion is intended to absolve ExxonMobil from responsibility for contributing to climate change through the emission of greenhouse gases in the production of its fossil fuel products.” The judge continued “ExxonMobil is in the business of producing energy, and this is a securities fraud case, not a climate change case.”

Exxon is battling similar accusations in other state and federal courts. Jenner & Block's Corporate Environmental Lawyer will continue to update on those matters, as well as other important climate change litigation cases, as they unfold.