As we near Earth Day 2022, the United States may be headed toward a profound change in the way EPA and similar administrative agencies regulate the complex areas of environmental law. EPA began operating more than 50 years ago in 1970, and has been tasked with promulgating and enforcing some of the most complex regulations on the books. From the Clean Air Act to the Clean Water Act; to CERCLA and RCRA and TSCA; and everything in between.

EPA has penned voluminous regulations over the past 50 years to implement vital environmental policies handed down from Congress—to remarkable effect. While there is certainly progress left to be done, improvements in air and water quality in the United States, along with hazardous waste management, has been impressive. For example, according to EPA data, from 1970 to 2020, a period in which gross domestic product rose 272% and US population rose 61%, aggregate emissions of the six criteria pollutants decreased by 78%. 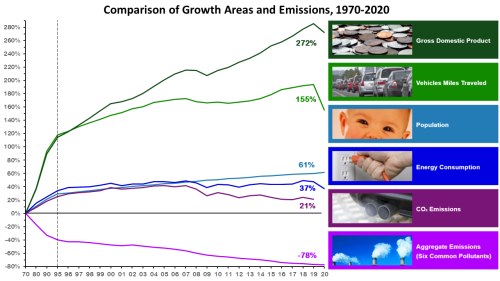 For the past 50 years the environmental administrative law process has worked mostly the same way: First, Congress passes a law covering a certain environmental subject matter (e.g., water quality), which provides policy objectives and a framework of restrictions, prohibitions and affirmative obligations. Second, EPA, the administrative agency tasked with implementing the environmental law, promulgates detailed regulations defining terms used in the law and explaining in a more comprehensive fashion how to comply with the obligations outlined in the statute. Depending on the subject matter being addressed, Congress may leave more details up to EPA, as the subject matter expert, to fill in via regulation. In some instances, there is a third step, where additional authority is delegated to the states and tribes to implement environmental regulations at the state-level based on the framework established by Congress and EPA. Occasionally someone thinks EPA overstepped its authority under a given statute, or failed to act when it was supposed to, and litigation follows to correct the over or under action.

Currently, this system of administrative law is facing challenges from parties that believe administrative agencies like EPA have moved from implementing Congress’s policy to setting their own. The most significant such challenge has come in the consolidated Clean Air Act (“CAA”) cases pending before the U.S. Supreme Court, West Virginia v. EPA, Nos. 20-1530, 20-1531, 20-1778, 20-1780.[1] In West Virginia v. EPA, challengers object to the Obama-EPA’s Clean Power Plan (“CPP”), which used a provision in the New Source Performance Standards (“NSPS”) section of the CAA to set greenhouse gas emission standards for existing power plants. The biggest issue with the CPP, according to challengers, is that the new standards would require many operators to shut down older coal-fired units and shift generation to lower-emitting natural gas or renewable units. Challengers, which include several states, power companies and coal companies, argue the CPP implicates the “major questions doctrine” or “non-delegation doctrine”. These doctrines provide that large-scale initiatives that have broad impacts can't be based on vague, minor, or obscure provisions of law. Challengers argue that the NSPS provision used as the basis for the CPP is a minor provision of law that is being used by EPA to create a large-scale shift in energy policy. EPA argues that, although it is currently revising its greenhouse gas regulations, the actions taken in the CPP were authorized by Congress in the CAA, are consistent with with the text of the CAA as written, and do not raise the specter of the major questions or non-delegations doctrines.

While this case will certainly dictate how EPA is permitted to regulate greenhouse gases under the CAA, it will likely have broader impacts on administrative law. On the one hand, the Court may issue a narrow opinion that evaluates the CPP based on the regulations being inconsistent with the text or intent of the CAA. On the other hand, the Supreme Court may issue a broader opinion that invokes the major questions or non-delegation doctrines to hold that based on the significant-impacts of the regulation, it is an area that should be governed by Congress, not an administrative agency. If the Supreme Court takes the latter route, it could set more limits on Congress’s ability to delegate regulatory authority to administrative agencies like EPA.

Indeed, in the Supreme Court’s recent decision on the OSHA emergency temporary standard on employer vaccine or test mandate (“the OSHA ETS”), Ohio v. Dept. of Labor, et al., 595 U.S. ____ (2022), the Court struck down an administrative regulation in a preview of what might be coming in the EPA CAA case. As everyone knows by now, the Supreme Court struck down the OSHA ETS, holding it was an overstep of the agency’s authority to regulate safety issues in the workplace. The Court’s opinion focused on the impact of the OSHA ETS—that it will impact 84 million employees and it went beyond the workplace—instead of the statutory language. The Court stated, “[i]t is telling that OSHA, in its half century of existence, has never before adopted a broad public health regulation of this kind—addressing a threat that is untethered, in any causal sense, from the workplace.” Slip op. at 8.

Justices Thomas, Alito and Gorsuch invoked the major questions doctrine in their concurring opinion, stating that Congress must speak clearly if it wishes to delegate to an administrative agency decisions of vast economic and political import. In the case of OSHA and COVID-19, the Justices maintained that Congress did not clearly assign to OSHA the power to deal with COVID-19 because it had not done so over the past two years of the pandemic. Notably, the fact that when Congress passed the Occupational Safety and Health Act, it authorized OSHA to issue emergency regulations upon determining that “employees are exposed to grave danger from exposure to substances or agents determined to be toxic or physically harmful” and “that such emergency standard[s] [are] necessary to protect employees from such danger[s]”, was not a sufficient basis for the Court or the three consenting Justices. In their view, in order to authorize OSHA to issue this vaccine or test mandate, Congress had to do more than delegate to OSHA general emergency powers 50 years ago, but instead would have had to delegate authority specific to the current pandemic.

Applying this logic to EPA and the currently-pending CAA case, Justices Thomas, Alito and Gorsuch may conclude that provisions of the CAA written 50 or 30 years ago, before climate change was fully on Congress’s radar, should not be used to as the basis for regulations that impact important climate and energy policy. Of course, many questions remain: Will a majority of the court adopt this view, and how far they will take it? If Congress can’t delegate climate change and energy policy, what else is off the table—water rights? Hazardous waste? Chemical management? If Congress can’t delegate to EPA and other administrative agencies at the same frequency as in the past, how will Congress manage passing laws dealing with complex and technical areas of law?

All of these questions and more may arise, depending on how the Supreme Court rules in West Virginia v. EPA. For now, we are waiting to see what will happen, in anticipation of some potentially significant changes on the horizon.

[1] Jenner & Block filed an Amicus Curiae brief in this case on behalf of Former Power Industry Executives in support of EPA.