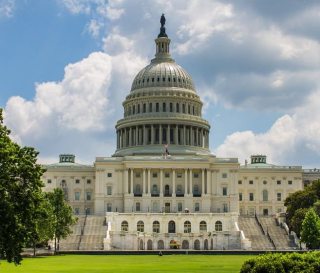 In a compromise move many months in the making, on August 7, 2022, the Senate passed a spending bill dubbed the Inflation Reduction Act of 2022, which contains provisions aimed at lowering drug prices and health care premiums, reducing inflation, and most notably for our readers, investing approximately $369 billion in energy security and climate change programs over the next ten years. The Inflation Reduction Act, which is the Fiscal Year 2022 Budget Reconciliation bill, passed on entirely partisan lines in the Senate, with all 50 Democratic senators voting in favor, all 50 Republicans voting against, and Vice President Harris breaking the tie in favor of the Democrats. The bill is currently pending before the House of Representatives, where it is expected to be hotly contested but ultimately pass.

According to Senate Democrats, the Inflation Reduction Act “would put the U.S. on a path to roughly 40% emissions reduction [below 2005 levels] by 2030, and would represent the single biggest climate investment in U.S. history, by far.” There are a wide variety of programs in this bill aimed at achieving these lofty goals, including:

Drilling down on some of these many provisions, the clean vehicle consumer tax credit has already sparked controversy due to the requirement that certain manufacturing or components be sourced in North America. The Inflation Reduction Act would maintain the existing $7,500 consumer tax credit for the purchase of a qualified new clean vehicle. The Act would get rid of the previous limit that a single manufacturer could only offer up to 200,000 clean vehicle tax credits—a limit that many manufacturers were hitting. However, under the new bill, that tax credit is reduced or eliminated for electric vehicles if the vehicle is not assembled in North America or if the majority of battery components are sourced outside of North America and if a certain percentage of the critical minerals utilized in battery components are not extracted or processed in a Free Trade Agreement country or recycled in North America. Manufacturers have indicated these battery sourcing requirements are currently difficult to meet, and may result in many electric vehicles being ineligible for this tax credit in the near term.

Another controversial point in the Act is the handling of oil and gas rights vis-à-vis wind farm projects. The Act would allow the sale of tens of millions of acres of public waters to the oil and gas industry as part of an overall plan to require offshore oil and gas projects to allow installation of wind turbines. A group of 350 climate groups, including Senator Bernie Sanders, criticized this and other provisions they saw as favorable to the oil and gas industry in the Act. Despite his criticism of certain aspects of the Inflation Reduction Act, Senator Sanders ultimately voted for the bill.

The House is expect to vote on the Inflation Reduction Act very soon and if it is passed by the House, President Biden will sign it into law. We will continue to track the Act’s progress and its impact on the regulated community. You can follow the Corporate Environmental Lawyer Blog for all of the latest developments.