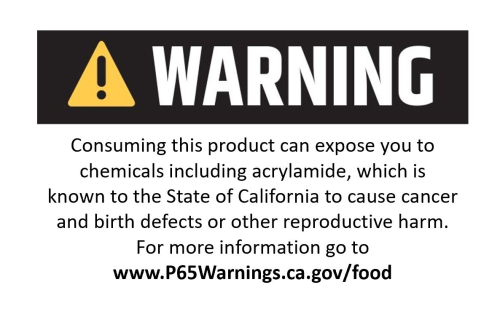 On September 16, 2022, California’s Office of Environmental Health Hazard Assessment (OEHHA) submitted to the California Office of Administrative Law (OAL) a revised Proposition 65 warning label requirement for the use of acrylamide in food and beverages that OEHHA claims will resolve the First Amendment claims being asserted by the California Chamber of Commerce (CalChamber) in federal district court in California.  OAL is expected to approve OEHHA’s “safe harbor warning” for acrylamide by the end of October 2022.

Under California’s Safe Drinking Water and Toxic Enforcement Act of 1986, commonly referred to as Proposition 65 (Prop. 65), businesses are required to provide warnings to consumers about significant exposures to chemicals that cause cancer, birth defects or other reproductive harm.  As of February 25, 2022, almost 1,000 chemicals are subject to this requirement and one of these chemicals is acrylamide.

Acrylamide can form through a natural chemical reaction in high-temperature cooking processes such as frying, roasting, and baking, and is commonly found in food products such as coffee, grain and potato products.  Studies indicate that it has likely always been present in foods cooked at high temperatures.

In 2019, CalChamber sued the California Attorney General for violating its members’ First Amendment rights against compelled speech by requiring food products containing acrylamide to include a Prop. 65 cancer warning.  In its complaint, CalChamber alleges that acrylamide was identified as a carcinogen solely on the basis of laboratory animal studies, and that its members will be required to convey “to consumers the false and misleading message that consuming the products will increase consumers’ risk of cancer, even though there is no reliable evidence that exposure to dietary acrylamide increases the risk of cancer in humans.”  The Council for Education and Research on Toxics (CERT) intervened in the matter to defend the Prop. 65 acrylamide warning.

In March 2021, the court issued a preliminary injunction that barred new Prop. 65 acrylamide lawsuits from being filed during the pendency of the litigation, noting that the Attorney General had not shown that the warning requirements were “purely factual and uncontroversial.”  CERT appealed the court’s ruling and in March 2022, the Ninth Circuit Court of Appeals upheld the lower court’s ruling, thereby reinstating the district court’s preliminary injunction.  The Ninth Circuit specifically acknowledged statements by scientific bodies such as the Food and Drug Administration, American Cancer Society, the National Cancer Institute, and even the State of California to emphasize the “robust disagreement by reputable scientific sources” of whether acrylamide can be linked to cancer in humans.

In direct response to CalChamber’s First Amendment challenge, on September 17, 2021, OEHHA issued a Notice of Proposed Rulemaking that proposed the following “safe harbor warning” for acrylamide in food and beverages:

Consuming this product can expose you to acrylamide, a probable human carcinogen formed in some foods during cooking or processing at high temperatures. Many factors affect your cancer risk, including the frequency and amount of the chemical consumed. For more information including ways to reduce your exposure, see www.P65Warnings.ca.gov/acrylamide.

Notwithstanding OEHHA’s efforts to respond to CalChamber’s First Amendment challenge, the new “safe harbor warning” will not stop the ongoing litigation in that CalChamber claims that this new warning language continues to violate its members’ First Amendment rights.  As such, the CalChamber lawsuit will continue to move forward and any subsequent ruling by the court will provide additional clarification on potential First Amendment limitations on Prop. 65 warnings.

We will continue tracking Proposition 65 developments through the Corporate Environmental Lawyer blog.  Regardless of OAL’s decision on the latest regulatory proposal, the current action and similar litigation relating to glyphosate establish a litigation roadmap for businesses that may otherwise be subject to Prop. 65 requirements based on disputed science.