On January 6, 2023, EPA announced that is was issuing a proposed rule to lower the National Ambient Air Quality Standards (“NAAQS”) for fine particulate matter (“PM2.5”), also referred to as soot. The current primary annual NAAQS for PM2.5 is 12 micrograms per cubic meter (µg/m3). EPA’s proposal will accept comments on reducing that annual NAAQS to a level between 9 and 10 µg/m3. EPA is proposing to keep in place the existing secondary annual standard for PM2.5, the primary and secondary 24-hour standards for PM2.5, and the primary and secondary standards for PM10.

The current standards have been in place since 2012, and were most recently reaffirmed by EPA in 2020. Then, in June of 2021, EPA announced it was reconsidering that 2020 decision, starting the process that lead to the current proposed rule. The NAAQS are national air quality goals set by EPA for criteria air pollutants (like particulate matter), at levels that will that will protect the public health with an adequate margin of safety (primary NAAQS) and protect the public welfare (secondary NAAQS). Notably, the NAAQS are set without consideration of cost or technical feasibility of compliance. Section 109(d)(1) of the Clean Air Act requires EPA to review existing NAAQS at 5-year intervals.

Particulate matter emissions come from a variety of sources, including power plants, unpaved roads, construction sites, mobile sources, and other industrial sites. Particulate matter pollution can cause significant health effects, primarily lung and other respiratory disease. Particulate matter also has environmental impacts, including as the primary cause of haze. EPA estimates that if finalized, a lowered primary annual PM2.5 standard at a level of 9 µg/m3, the lower end of the proposed range, would prevent:

Currently, most of the country is in attainment of the annual PM2.5 NAAQS, with the exception of several counties in California and one county in Pennsylvania. However, that attainment status may change drastically if the standard is lowered by up to 25%. Once the new PM2.5 NAAQS is set, states will have to determine what areas are in attainment or nonattainment, and then update their State Implementation Plans with rules or other plans that will allow the states to maintain attainment or reduce PM2.5 emissions and achieve attainment for any areas that are above the new standards. 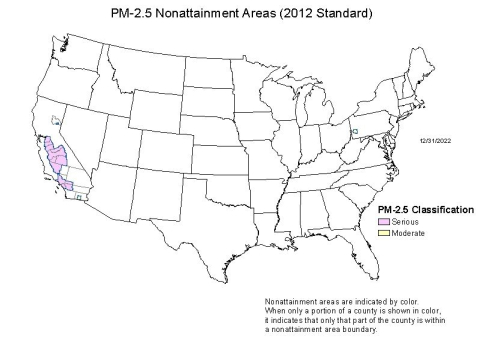